This is a simple soccer shooting drill that is great for warm-up to a shooting practice or warm-up prior to a game. 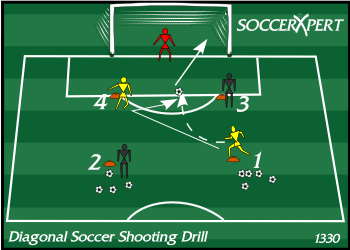 This is a simple soccer shooting drill that is great for warm-up to a shooting practice or warm-up prior to a game.

Create a 10X10 grid just beyond on the edge of the 18 yard box. Divide the team info 2 lines on the far cones facing the goal. One player from each line steps to the cone near the 18 (this player becomes the player that lays the ball off to the player on the cone farthest from the 18).
Drill Instructions

Player 1 passes a diagonal ball to player 4, player 4 has a touch and lays the ball off into space for player 1 to run onto the ball and hit a first time strike on goal. The shooting player (player 1) takes the place of the player that set up his shot (player 4), and player 4 shags the shot and switches lines.

Make sure the players switch lines so they shoot with both feet.