The focus of this soccer game is to teach players recognize the first defender (closest defender to the ball) and second defenders (player covering/supporting the first defender). The drill is geared towards teaching the players how to pressure the player with the ball and proper cover positioning. 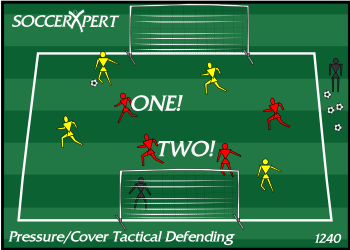 The focus of this soccer game is to teach players recognize the first defender and second defenders.